Today is Kaylee Cavanaugh’s first round match in the Tournament of Heroines and she would really love it if you stopped by and cast your vote for her.

You can even vote more than once if you have an extra computer, a cell phone or other device that will let you vote!

{Just click on Tod’s picture above to be taken to the blog hosting the tournament to vote for Kaylee and support this amazing heroine.} 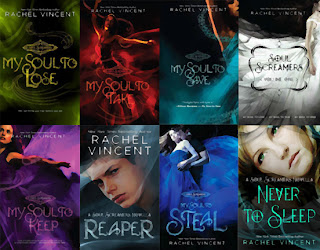 Kaylee Cavanaugh, if you haven’t yet met her, is the main character in Rachel Vincent’s Soul Screamers series. She’s a bean sidhe, or banshee, and aside from the potential to live a little longer than most humans, she’s just a regular girl.

Well, except for the fact that she has to “sing” whenever someone near her is about to die. Though it only sounds like singing to male bean sidhes like Nash or Tod. To everyone else it sounds like she’s screaming at the top of her lungs. So, no. Not one of the most wished-for abilities to have.

But even without a super power or supernatural strength she is still amazing. And even without the ability to practice magic, wield a sword, or master the art of hand-to-hand combat, there is no question that Kaylee is, in every sense of the word, a heroine. 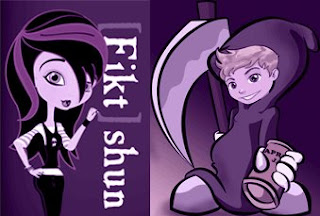 Kaylee Cavanaugh is BRAVE. Sometimes a little too brave. She’s willing to do whatever it takes to help her friends. Even if it puts her at great risk – like heading to the Netherworld to help Tod try and save his ex. She may be a bean sidhe but she doesn’t have super-human strength. She can be killed. And with all the trips she’s made to the Netherworld and interactions with the demons and other creeptacular things there, it’s a wonder she’s lasted as long as she has.

Kaylee is LOYAL. She’s proven just how loyal she is to the people she loves over and over. She doesn’t abandon them to save herself. She doesn’t give up on them when things get tough. She stood by her boyfriend Nash’s side for longer than any girl might. Even when he broke her heart. She helped her cousin Sophie on more than one occasion, even when she never deserved it. And she’s been there for all of her friends and family whenever they’ve needed her. Which leads right into the fact that…

Kaylee is SELFLESS. She always puts others first. When things go wrong at Eastlake – and they always seem to go wrong – and people end up dying (what is it with Eastlake anyway?), she’s right there trying to find out how to fix things. Even when her own life is falling to pieces, her heart is breaking, or she gets some news that would leave others curled up in bed sobbing. She will always choose to help rather than wallow in self-pity.

If these characteristics are still not enough for you to believe in Kaylee, check out this video to see just a fraction of what she has to go through and what she’s willing to do to keep her friends free from harm.

And if you think all that makes her seem to good to be true, well, she’s not that perfect. She is flawed. She makes mistakes. And she’s incredibly sarcastic. It’s one of her personality traits that I actually like most.

I’ve included just two passages in my defense post that highlight her sarcastic side, but here are just a few more.

In which Kaylee shows her humble yet sarcastic side…

Nash Hudson. Holy crap. I almost looked down to see if ice had anchored my feet to the floor, since hell had surely frozen over. Somehow I’d stepped off the dance floor and into some weird warp zone where irises swam with color and Nash Hudson smiled at me, and me alone.

In which Kaylee masks her fear with sarcasm…

Great. “So not only am I not-human, but Death is my arch foe?” Who, me? Panic? “Anything else you want to tell me while we’re confessing?”

In which Kaylee tries to imagine what Tod looks like…

“So what does Tod look like? Whitewashed skeleton skulking around in a black cape and hood? Carrying a scythe? ‘Cause I’m thinking that would cause mass panic in the hospital.”

In which Kaylee imagines what her Aunt Val thinks of her…

Aunt Val took a butter knife from the silverware drawer. “What year is he?”

Her smile was a little too enthusiastic. “Well, that’s wonderful!”

Of course, what she really meant was “Rise from the shadows, social leper, and walk in the bright light of acceptance!” Or some crap like that. Because my aunt and overprivileged cousin only recognize two states of being: glitter and grunge. And if you weren’t glitter, well, that only left one other option…

I hugged her back, because I didn’t know what to say.

No problem? But it was a problem. I’d nearly died.

Anyone else would have done the same? But that wasn’t true, either.

I’d helped [them] because I couldn’t not help them. Because in most cases, I believe that people deserve a second chance. And because I couldn’t have lived with myself if I’d stood by and let them both die soulless, when I could have helped.

If you want to know what Tod has to say about her – and believe me, you won’t want to miss it – then be sure to head over to the YA Sisterhood’s blog. No one knows Kaylee better than he does.

Kaylee’s competitor in today’s match is Aura Salvatore of Jeri Smith-Ready’s Shade series. And while the two are in competition, we’re hoping to keep this friendly. No author or character bashing. No advocate bashing. Nothing mean-spirited.

Isn’t the point in all of this to celebrate our favorite heroines?

BUT KAYLEE WOULD LOVE YOUR HELP!

Especially as I have to be at work for over half the time that voting will be going on, and asleep for at least some of it. I can’t risk losing my job as much as I’d love to be the best advocate I can be. Which is why I’ve reached out to a few lovely people who offered to help out in my absence.

And given the stiff competition, Kaylee needs your help! Aura’s team has already put forth the battle cry. They’ve assembled Aura’s Army. And they have not only the advocate, but the author, Zach, Logan and Aura herself leading the charge.

So, if you already know and love Kaylee and would like to help her get the win, please be sure to VOTE, and spread the word on Twitter to VOTE KAYLEE with the hashtag #HeroineTourney  along with a link to the YA Sisterhood’s blog.

And if you haven’t met Kaylee or are still indecisive, feel free to head over to the tournament’s blog and check out my defense post to learn a little bit more about her and to see exactly what Tod thinks of her.

If you think you might just love her as much as I do or Tod does, then VOTE KAYLEE.

All content - except for guest posts and guest reviews - has been written by me and can not be copied or used without permission. All graphics and images used on my site – aside from book covers used for purposes of discussion – have either been given to me by authors, publishers or bloggers for guest posts, blog tours, interviews or promotion, have been sourced, have been designed by me or have been purchased for my exclusive use. Aside from images with a “grab code” beneath, no images can be used or displayed without permission.

All reviews on this website are unbiased and reviewers are in no way compensated for their reviews by the author, publisher, or any other agencies. While some reviews may be based on receipt of ARC copies of an authors work, a fair and impartial review is always given by the reviewer. Most of the reviews, however, are based upon books purchased after publication date.